In flux. In the moment. Stuck in time, but recognizing that to be stuck in time is also to be free to relish in being perpetually unstuck in time. In Era, as it were. The most fascinating and lasting artists to trip across the vast field we know as “popular music”–which is really just music, in general, when you think about it–are the ones who consistently allow us to ride shotgun along with them as they figure out who they are as artists. Think David Bowie, think P.J.Harvey, think Radiohead, think Kate Bush or Neil Young or New Order or Scott Walker or, hell, even Madonna anyone else you can or could always rely upon to hand you a record every couple of years that might surprise and confound you for a bit but usually leaves you glad you were handed the surprise in the first place. If you’re along for the ride, after all, you’re along for the ride, right? And if not, well, the last album is always gonna be there. Have at it. Robyn Phillips and the malleable art-pop combo behind her dubbed Vallens are moving along such rarified lines, anyway. On In Era, the band’s second full-length LP and third release overall for esteemed Toronto indie label Hand Drawn Dracula – also home to No Joy, Tallies, Beliefs, Cousins, Mimico and a whole lot of other cool acts you should know more about if you don’t already – vocalist, guitarist, keyboardist, songwriter and originator/overseer Phillips and the stable Vallens core of bassist/multi-instrumentalist Devon Henderson and drummer Colin J. Morgan are still audibly figuring out who they are. But the picture of what Vallens can be and will become as time goes on is growing more confidently defined, even as it remains willfully, tantalizingly and necessarily indistinct.

“I’m hoping we’ve kept people’s interest enough that they’ll open the book for the surprise,”says Phillips. On In Era, Vallens is definitely more than a little bit noisy and swooning and “shoegaze” and troubled and romantic and Goth (“I’ve tried to put on other hats,” Phillips concedes of the latter descriptor, “but that’s always just a part of it”) and all the other terms we’ve come to associate with the name through Vallens’ evolution from a Phillips solo project in 2014–kickstarted when Psychic TV contributor Jeff Berner talked her into recording a couple of tunes she was too nervous to play for anyone else after a chance meeting in New York–into the scorching-but-artful guitar band displayed on 2016’s debut Consent LP and 2018’s even more scorching, albeit also more artful, follow-up EP Dimmed In My Display. But it’s also resolute in being so much more than the expected sum of those parts, being much more “Vallens” than we’ve yet realized Vallens could be. And can be. And will be.

In Era is a patient, sculpted piece of work and an album that’s been obsessively “lived with” and laboured over by Vallens – not least by Henderson, who Phillips says “produced the hell out of this record” – and sequenced to be listened to as an A-side-to-B-side album. Which actually works rather well for the moment, since the lingering fallout from a certain global pandemic, responsible for delaying In Era‘s planned June 2020 release until now, gives us a lot of extra time to unpack the record’s many Select an area to comment on mysteries before Vallens, for years a formidable live band, returns to the touring trail and a collective habit of what Phillips terms “probably playing more instruments than you should at once.” And there are indeed mysteries to unpack. For one thing, there’s not a great abundance of typical “guitar-band” behaviour on In Era for a band known for rarely leaving home without its pedals. By Phillips’s own admission, Dimmed In My Display “almost overdosed on guitar tone.” “Because I’ve taught myself to play piano in the past two years, there’s actually not a lot of guitar on the album,” she says. “A lot of people see me as a guitar player or Vallens as a guitar-driven band, so I think that’s why this feels to me like even more of a departure. That’s not the only thing I can do.“I don’t use as many effects anymore. I’m focused way more on singing and getting back to my primary instrument, which is actually my voice. I’m ‘taking some air’ live, if you were to see us. Which, y’know, you won’t be able to for awhile. But I am singing a lot more and not playing guitar as frantically. So it’s definitely a shift.”

In Era is a slow burn, establishing a stately, cathedral-like atmosphere with the opening title track (which contains a subtle Dusty Springfield reference, should you care to seek it out) that sustains a mood for the duration described by Phillips as “nocturnal and austere-yet-deprived” and evocative of “a romantic, coquettish letter to the Void” and “marble floors cold on your feet that sprawling from your memory, forever again” whose opaque undertow has become apparent well before you reach the penultimate track called … yes … “Opaque Undertow.” Vallens indulges in some Warpaint-worthy wiggle on “While You Are Still Waiting,” a mild Bergman stalker fantasy on “Ingrid” and a touch of gnawing-but-skittering electro-ooze on “Difference Repeating” along the way. The dour, Portishead-ian creeper “Sheer,” meanwhile, truly reveals its genius once you’re aware that dub reggae is “the genre of music the band has most in common, other than Céline Dion” and can subsequently go back and listen and connect the dots between King Tubby and “My Heart Will Go On” for yourself. It isn’t until after the dreamlike false stasis of “Old Flame” that Vallens finally lets you really have it in somewhat expected Vallens style with the all-in feedback pile-on that concludes “Come Home.” But it’s first single “If I Don’t,” which lands next in the program and expertly aligns the Vallens you already know with the Vallens of the future, that perhaps most perfectly captures this moment in the band’s evolution. “If I had to pick one song to show to someone and say ‘This is how we sound now,’ I think that encapsulates it best,” says Phillips, who’s genuinely proud of In Era because it’s gotten her to that magical point of which musicians dream when she’s actually managed to translate the music she hears in her head to the exterior world. “All the songs feel special to me. Which is not to speak highly of myself, but it’s just a nice feeling to have–to know that I really tried to make this album the most reflective of my current style and taste and musicianship and it’s so rare that you actually get that and I think I achieved that. So I’m just proud of it. I don’t necessarily know that everyone’s gonna resonate with it, but it feels nice to feel strong in your own feelings about it.”

So, yes, In Era is a transitional album for a band that’s established quite quickly that it intends to remain in transition indefinitely. And, due to current global circumstances during the COVID-19 era, its haunted “Alright, what’s next?” thematic content has wound up becoming oddly prescient. Albeit accidentally.“It’s largely about a transitional time in someone’s life where they have ended an era of their life and can see the next one forming but are floating in between two things,” says Phillips. “It was written before COVID times but it weirdly feels even more apt and appropriate now,” It’s about being right in between, right in the limbo of two really large events, and the tenderness and weirdness and sadness and uncertainty and beauty and all of the complicated and vexing feelings that can come with that moment of being in between two things, when you can feel the heaviness of being nowhere. That’s applicable to everyone right now, with COVID. So I’m hoping it resonates with people in that regard.” – by Benjamin Rayner

“13 Songs You Should Listen To Now” – SELECTS PLAYLIST / PITCHFORK

“I’ve fallen in love with Vallens, a shoegaze band from Toronto, and their music video for “Dark Tunnel.” It is a shadowy mirage through the woods, splashed with glitter and fairy lights” – ROOKIE MAG

“21 Female-Fronted Bands You Need To Listen To” – BUST

“dissonance, piercing guitars and impassioned vocals to make a sound akin to Siouxsie & the Banshees or Los Angeles’ X” – CLASH 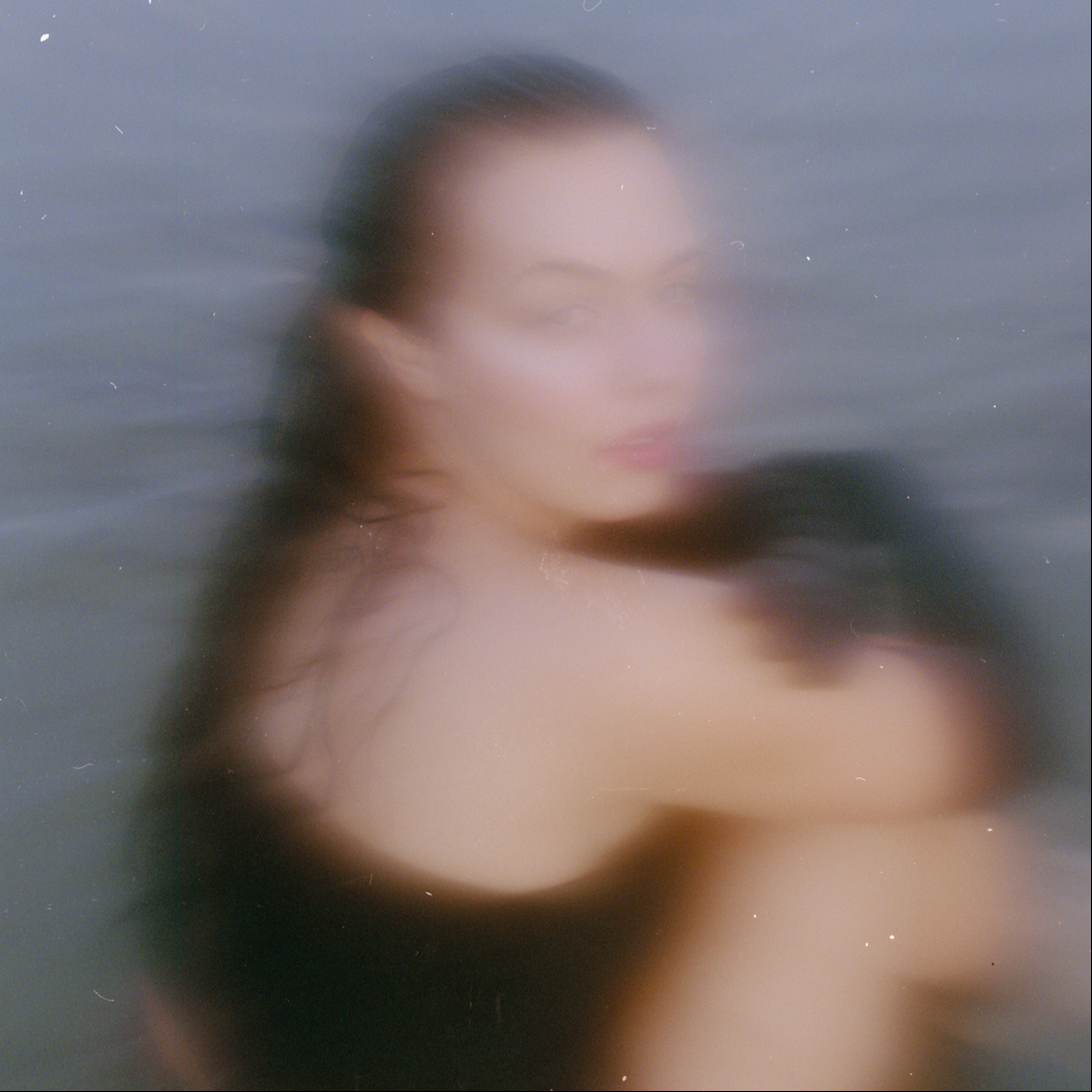 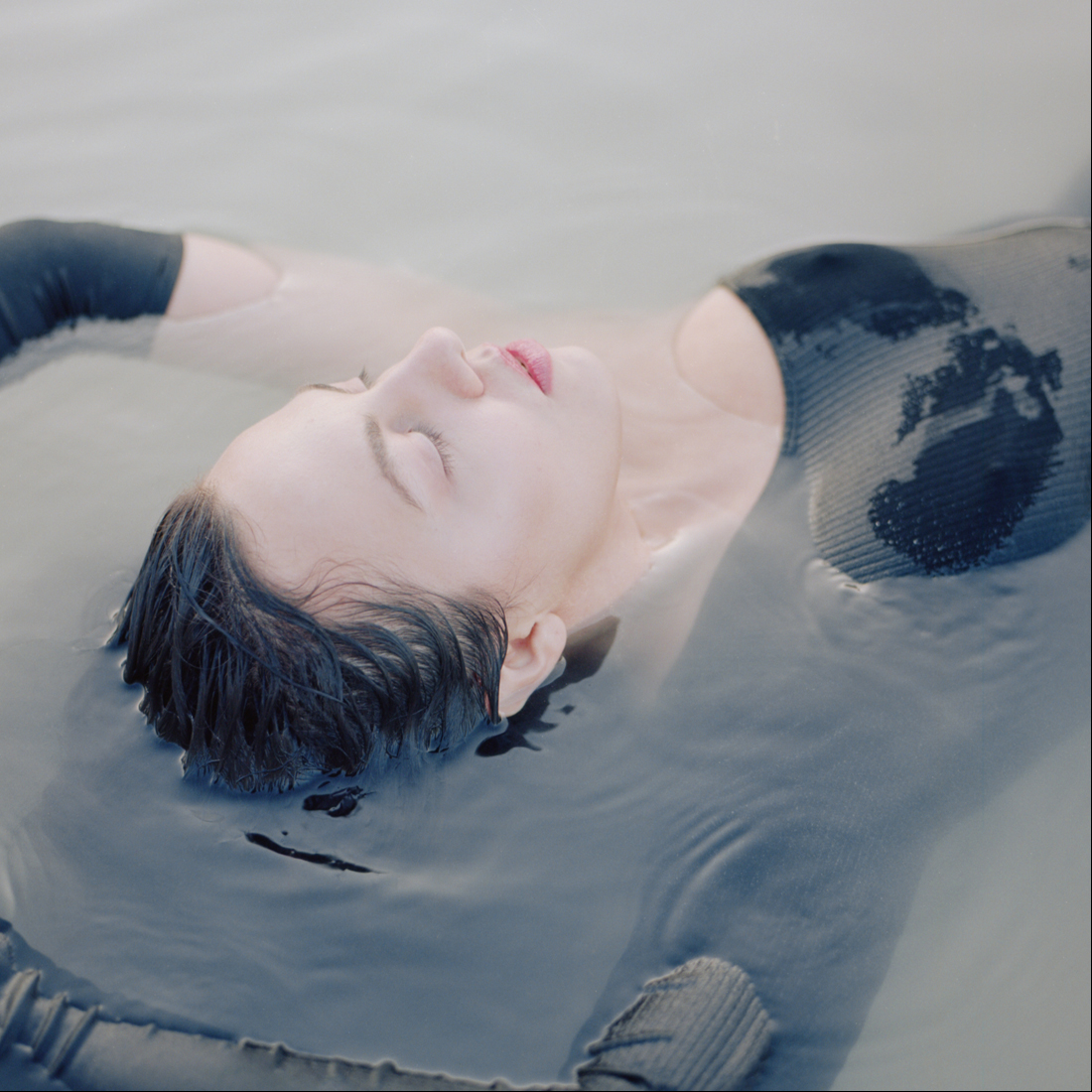 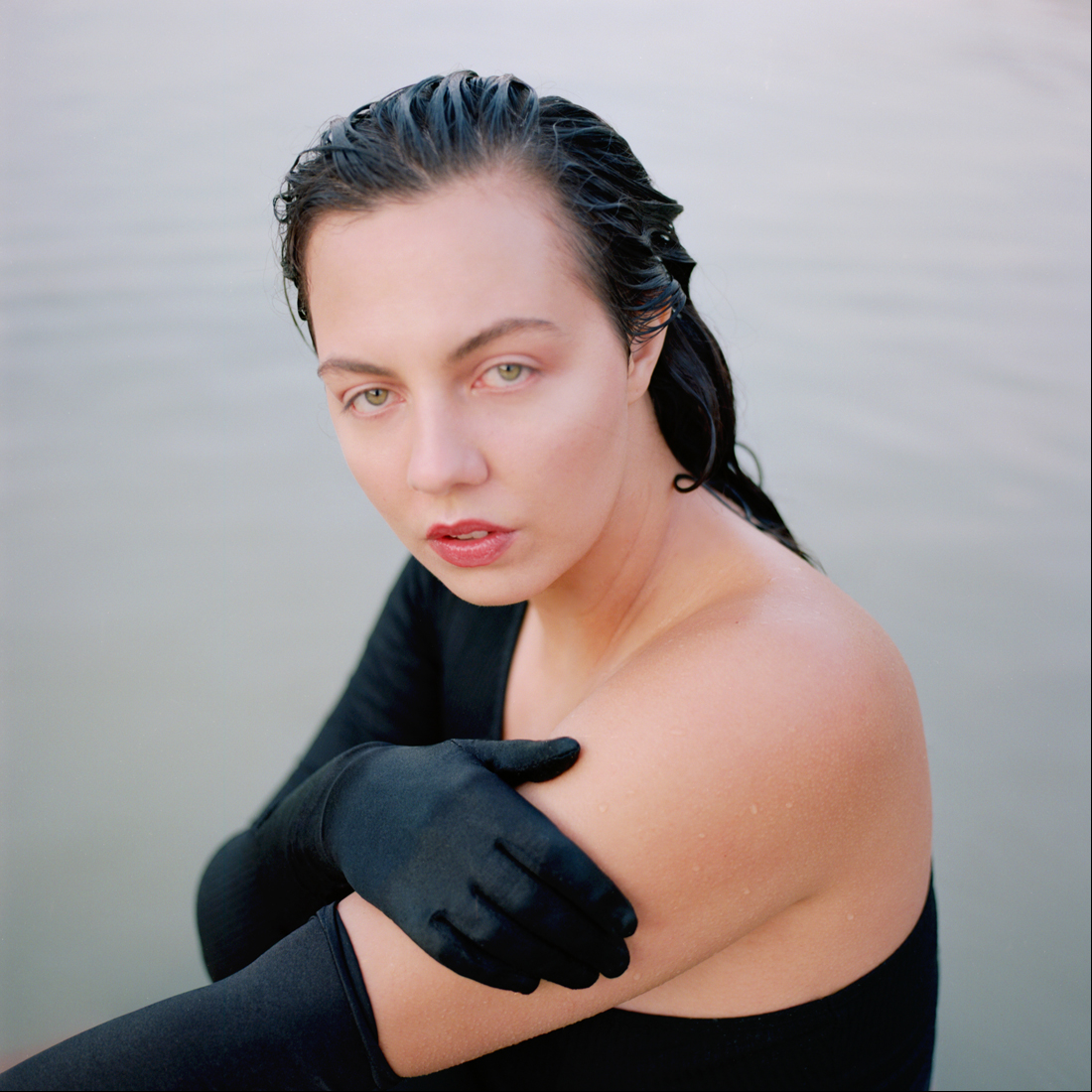 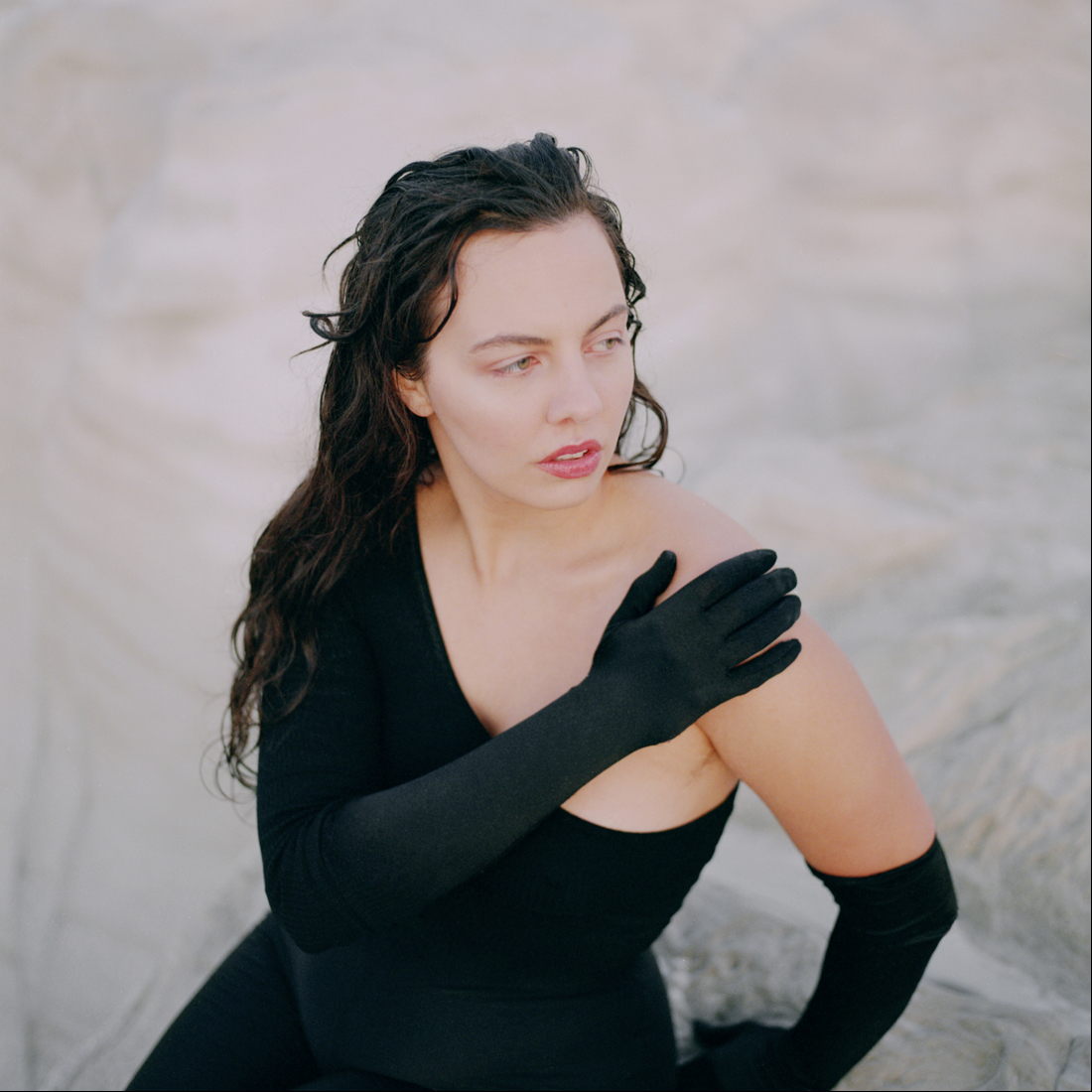 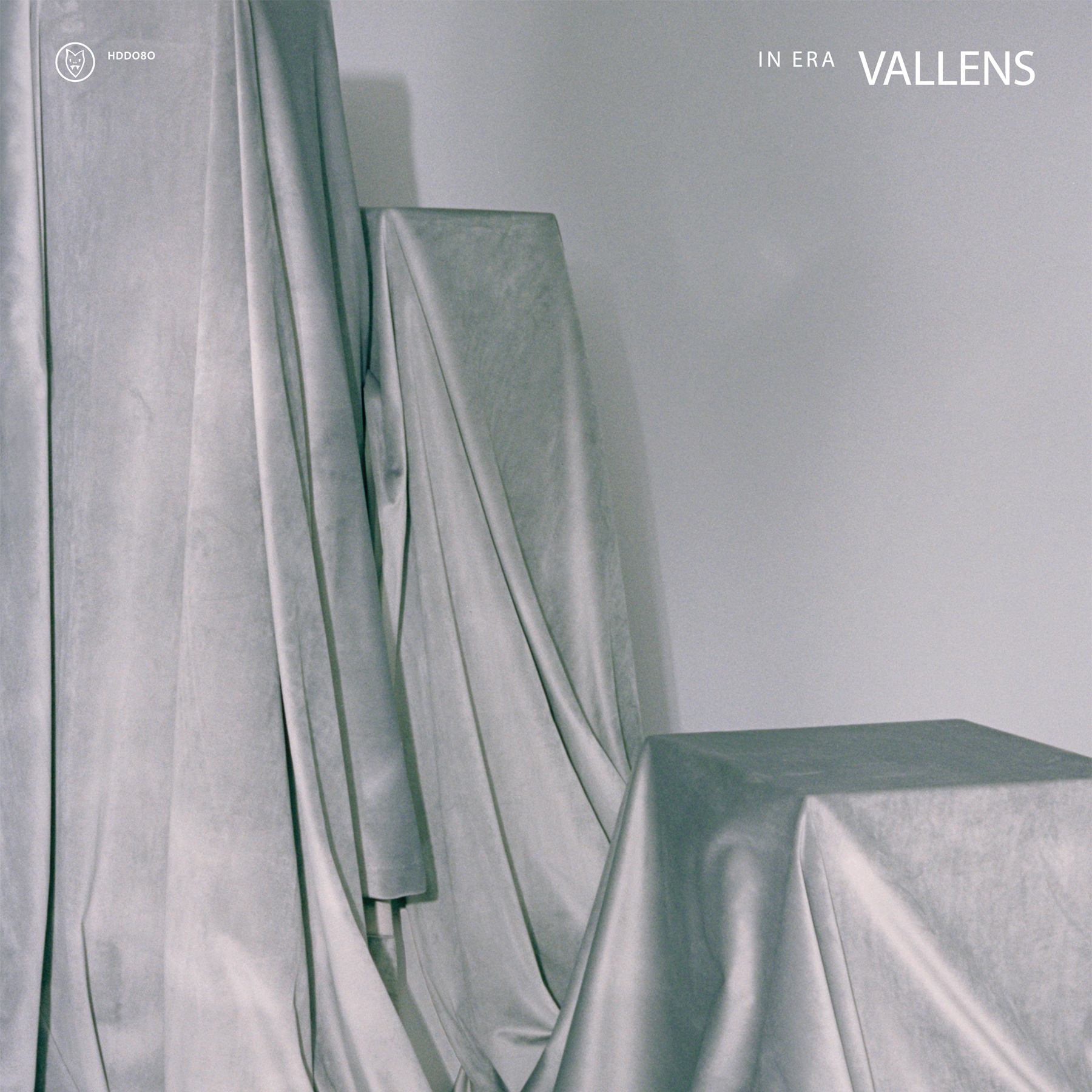 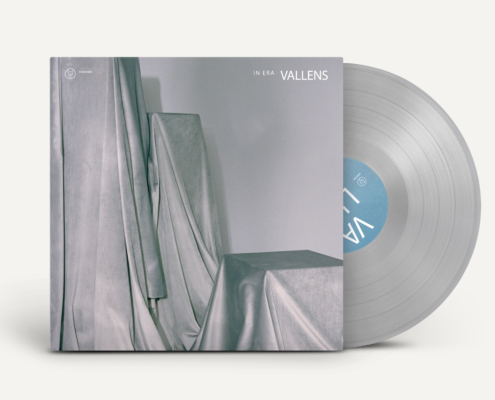 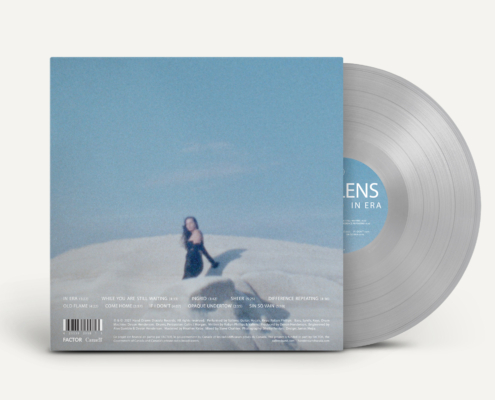 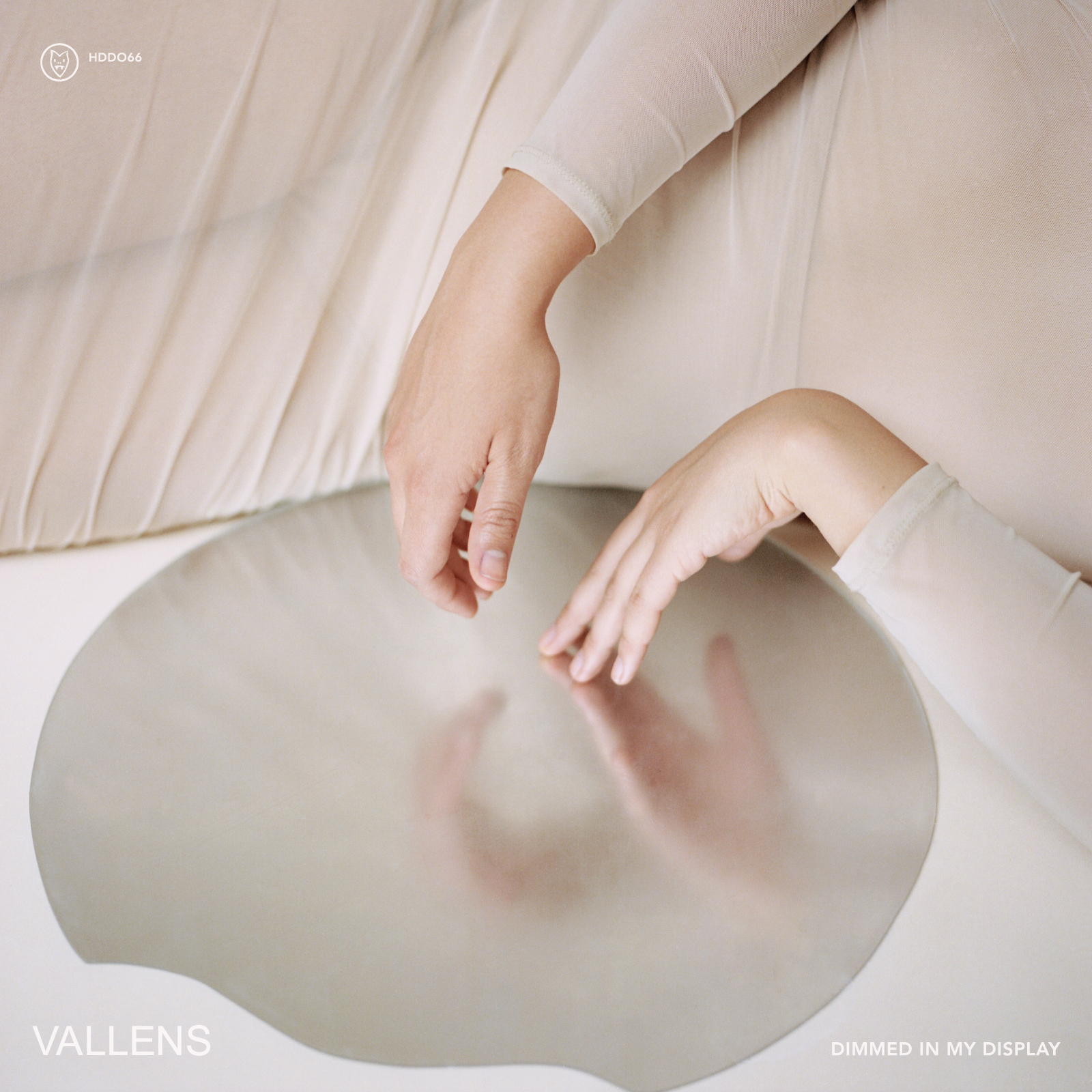 VALLENS
DIMMED IN MY DISPLAY

“Bold, striking songwriting, Vallens match the pop impulses of ABBA to the ground-breaking approach of This Mortal Coil” – CLASH

“The dark melodic Toronto band wield even more cinematic power on their upcoming EP, ‘Dimmed In My Display.’” – NOISEY

“Hard to pin down, their chorus-friendly sounds invoke UK bands like Lush, while their noisey breakdowns are more akin to Sister-era Sonic Youth. Vocalist/Guitarist Robyn Phillips has that rare-quality voice that sticks in your head, like the early works of Sinead O’Connor.” – LIVE IN LIMBO 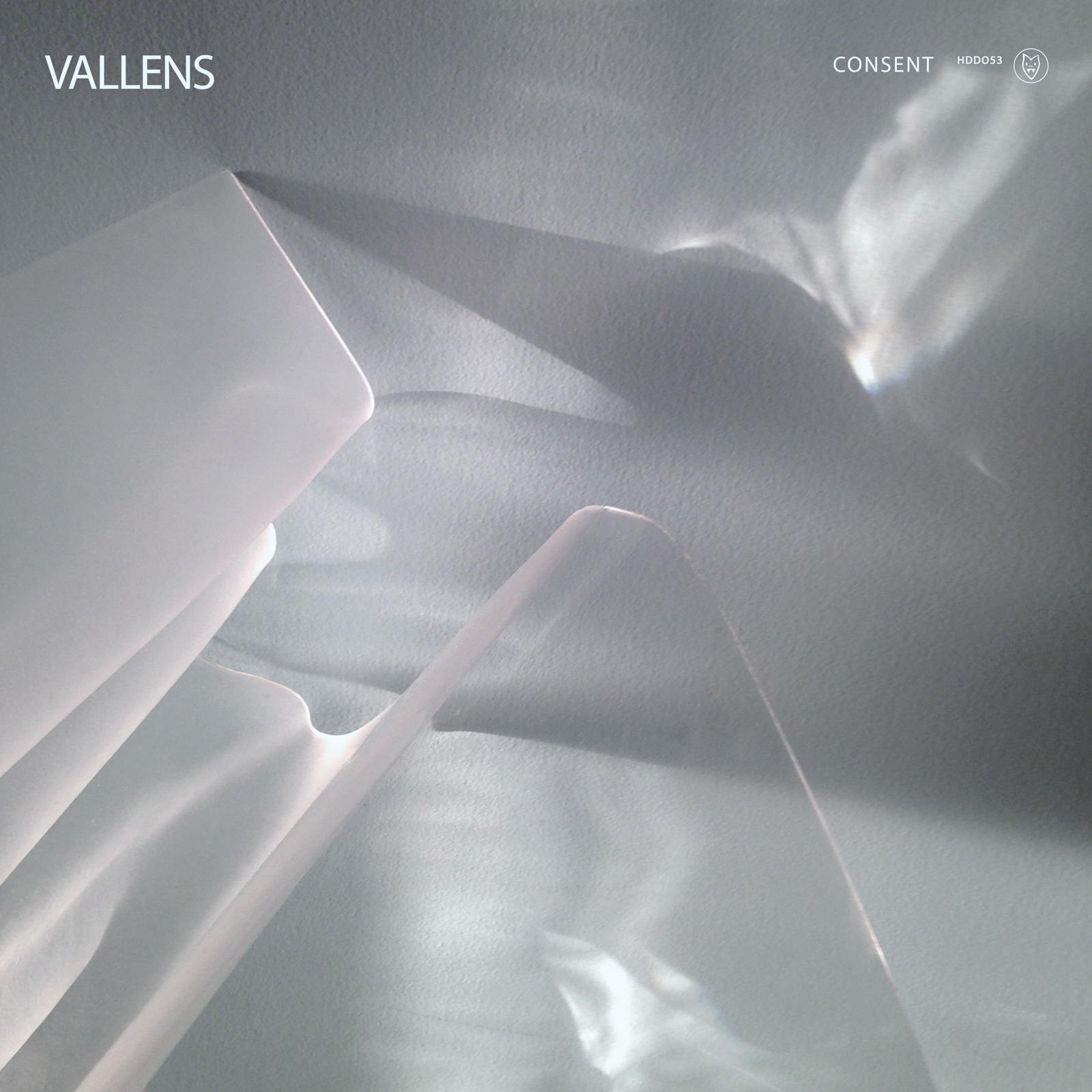 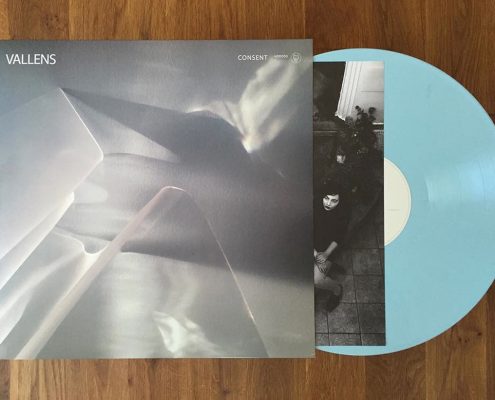 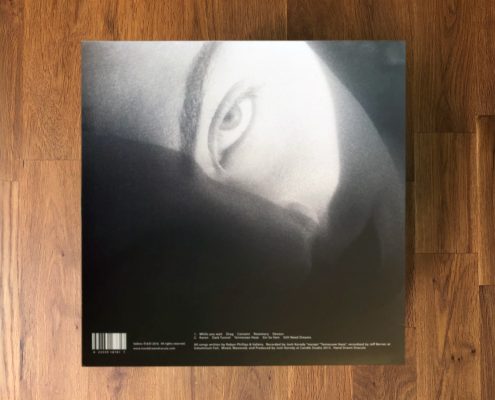 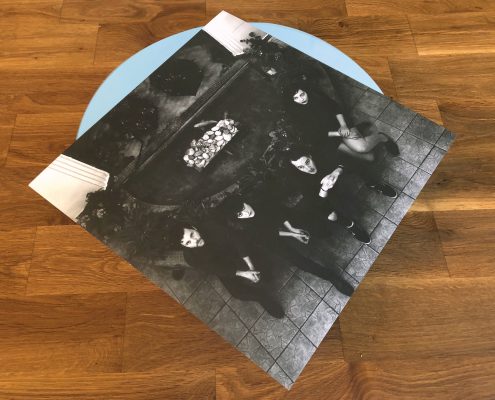 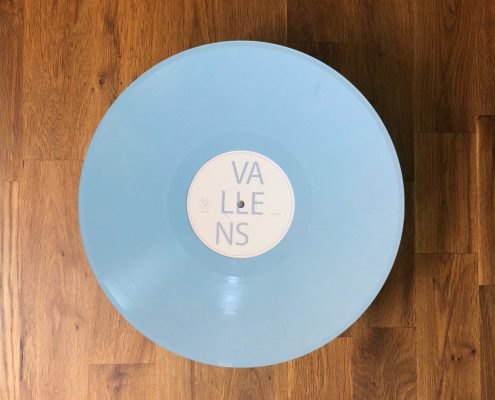 “Vallens wants you to believe women – the album deals with a significant amount of heavy material including, but not limited to, addiction, sexual and physical consent, and death” – DAILY VICE

“From its melancholy start to its fantastic finish, Consent is a twisted fever dream truly evoking the band’s namesake” – Album Of The Week /NOW

“the type of record one should listen to with eyes closed, to fully allow the mind to be swept away on a journey that both delights and disturbs, in the most enchanting of ways” – 8/10 EXCLAIM! 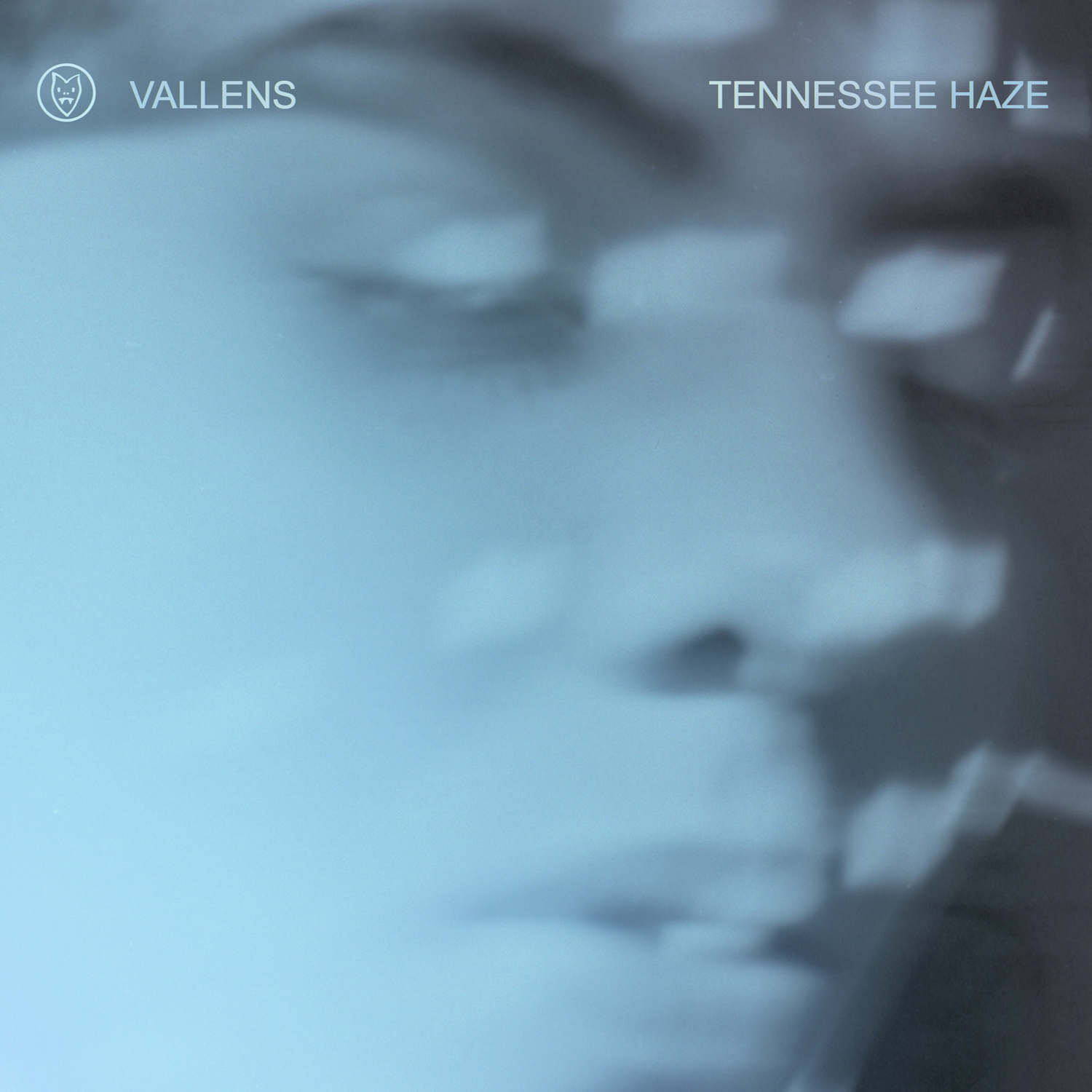 “Directed by fellow Torontonian Shelby Fenlon, the clip finds Vallens mastermind Robyn Phillips wandering through a forest and other nature zones. It’s appropriately soft-focus, and the off-kilter chord changes of the song add to the feeling of dreamy disorientation.” – NOISEY